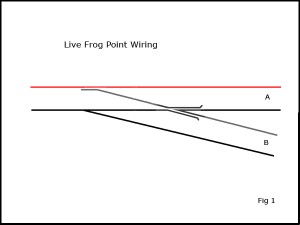 There is actually no need to modify turnouts or points (whatever you prefer to call them) for operation on DCC. If they work well on DC they will work on DCC. However good pickup is critical for DCC to ensure a nice clean signal to the decoder, which is why we prefer to use live frog pointwork as there is no dead section for the wheels to roll over, and for exhibition use they wear better under heavy operation.

The pointwork as supplied from manufacturers usually rely on contact between the point blades and the stock rails to give a feed to the frog. This gives the diagram shown in Fig. 1, which works, but has a number of disadvantages. Point blade contact is not always reliable and as shown in the diagram road B is shorted out, with DC this doesn’t usually cause a problem but with DCC any loco standing on road B with lights or sound goes dead, lights go out, sound stops. If the turnout is thrown, the same would happen to road A. This is easily countered by adding an insulated break on both rails just to the rear of the frog and linking the stock rails to the frog rails behind the breaks as shown in Fig. 2. 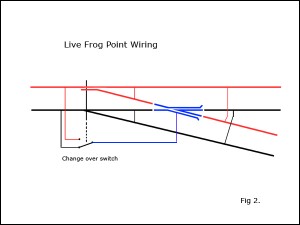 For foolproof operation the frog should be completely isolated and switched from the turnout throw mechanism, either mechanically with a switch, micro switch or via a point motor contact.

The new Peco points already feature switch rail breaks, but are bonded beneath the point with a small wire link. This can be broken away and a wire link added to bond the switch rails to the appropriate stock rail. 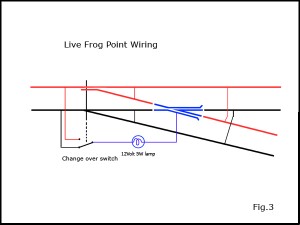 For DCC this has only one major disadvantage. If a locomotive overruns the point from the rear and enters the frog when the route is set against it, a short is caused, tripping the breaker and bringing the layout to a halt. This is the most common cause of breaker trips under DCC operation. However in the worst case scenario the contact may not be good enough to trip the breaker, either due to the distance from the supply, insufficient wire size or poor wheel contact. In a situation like this anything up to the current limiting of the booster will be running through the wheels and pickups of the loco causing the fault, which can be 5 amps or more. Wheels and pickups of small scale locomotives are not designed to carry 5 Amps. If left uncorrected for only a few seconds this can cause severe damage to a loco, don’t ask me how I know. This brings us to Fig.3. By inserting a 12 Volt 5 Watt lamp in the frog wire, the problem is eliminated. We use a car interior or side lamp. It works on the principle that when the lamps are cold they have very little resistance and do not hamper normal operation. In fault conditions the full supply voltage is applied across the lamp and it illuminates, increasing it’s resistance and limiting the current to a safe value of around 1 Amp. It even gives a visual indication that a fault exists. As the frog is usually not as long as the wheelbase of even the shortest locomotive it doesn’t normally carry the full current load of even one locomotive, so we have found a 5 Watt lamp to be adequate, you can try a lower wattage lamp, but you may find the lamp glows dimly when a loco crosses the frog and a slight reduction in speed. Do not be tempted to use lamp protection on scales larger than OO as the running current is too great and will cause the lamps to glow under normal operation. You could try a larger wattage lamp, such as a car headlamp. However a glowing lamp is one thing, lighting up the entire room is something else, plus the fire risk from such a lamp is too great.