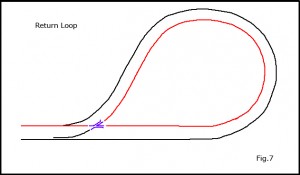 The strange title given to this page is the colourful terms given to reversing loops, triangles and DCC modules given to controlling them by the American Railroads.

Starting with a reversing loop or Balloon track if you prefer. This is the age old problem you encounter not long after you get your first train set and start experimenting with the track components. Lay the track out, connect the power and you have an instant short circuit. A quick look at Fig.7 and it is immediately apparent what’s wrong, the right rail meets the left rail as it travels round the loop. This can be corrected by adding section breaks as shown in Fig.8. This is the DC cure. The train must stop while in the loop and the turnout and controller reversed to allow the train to continue. 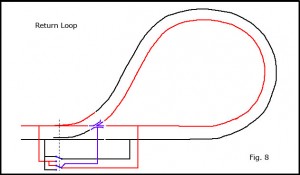 The contacts don’t have to be on the turnout, a separate switch will do, but this is a neater solution. This arrangement will also work with DCC. The advantage with DCC is the train doesn’t have to stop or the controller reversed, as direction is controlled by the decoder in the loco. Two important points must be observed, 1. If the train has metal wheels it must be clear of the section breaks before the turnout is thrown (the entire train must fit within the loop) and 2. the turnout contacts or switch must have break before make contacts, otherwise the track will be shorted out while the turnout is thrown. The circuit breakers in boosters are normally fast enough to detect this and will shut down. Even if it doesn’t, you don’t really want to switch 5 amps with these contacts. 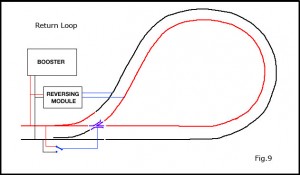 The other DCC way is to use a reversing module such as Lenz’s LK100 or DCC specialties PSX-AR as shown in Fig.9.

These connect to the Booster or command station output terminals and switch the loop rails automatically by detecting the instantaneous short as the train crosses the section break. Some versions also include an accessory decoder to throw the turnout as well, making traveling through the loop completely automatic, handy for hidden sections. 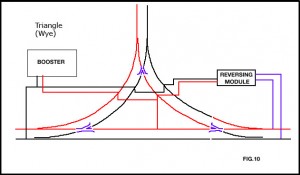 The reversing modules can handle more than one reverse loop providing only one loop is in use at any one time. In the same way a triangle (wye) uses a reversing module to switch one tail track, it doesn’t matter which one. Just ensure the isolated turnout is the one connected to the Reversing Module. Contacts as shown in Fig.8 on the turnout would work as well, but in this case it’s the rails at the toe of the turnout that are switched to phase with the triangle tracks. In Fig.10 frog wiring is not shown for clarity, but is still required. 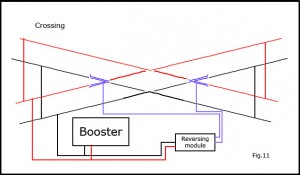 Finally possibly the most useful way a reversing module can be used is for wiring crossings as shown in Fig.11. Note this is a crossing not a crossover, for a crossover see Fig.4. There is really no other easy way to wire live frog crossings for DCC as there are no moving parts to add contacts to. To ensure the reversing module works reliably it is important it can see a good short circuit. To this end make sure adequate wire size is used and wire runs are kept as short as possible.