Our first project is to install a sound decoder in a Brush Type 4, that’s a class 47 to you modern types. The model I used is Bachmanns 32-800, the two tone green model. As I intended it to be a model of the 1964 version, this is my best starting point. It is a very nice model and runs great straight out of the box. It is good to see British models finally falling in line with American construction methods. That is, a large central motor driving both bogies through drive shafts, it’s just a pity it’s taken them 40 years to do it. This system gives excellent tractive effort and an all wheel drive. 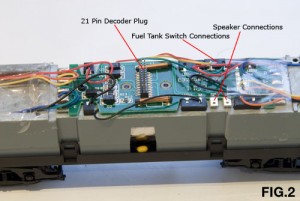 The model is sold as DCC ready, which it is, but it isn’t DCC sound ready. The model comes equipped with a 21 pin decoder plug and this provides all the necessary connections for a sound decoder and an additional 4 function outputs. I used South West Digitals class 47 sound chip (52047). This is a Loksound decoder which comes loaded with the Sulzer engine sound files. It comes equipped with an Oval speaker and enclosure and once the body is removed from the chassis and Bachmanns adaptor board removed, the chip will drop right on. Pin 11 is missing to ensure the board can only be fitted the right way. However there isn’t really any provision for the speaker. Most of the interior is taken up with a large weight to increase tractive effort. There is a recess in the top of the weight below the radiator fans, but unless you remove the fans there isn’t room for the speaker and certainly nowhere for the sound to go. However there is room for the speaker in the fuel tank and as the fuel tank fits flush against the underframe floor it provides it’s own enclosure. Bachmann in it’s wisdom have fitted a switch in the fuel tank to switch the tail lights on and off. This might have been OK in DC days, but the whole idea of DCC is to control everything from the controller handset. Taking a loco off the track to operate the lights is not on. The fuel tank switch had to go anyway to make room for the speaker so I modified the Bachmann mother board to give DCC control of the rear marker lights. 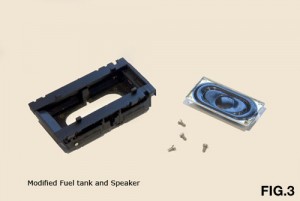 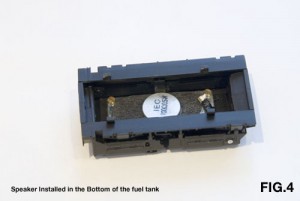 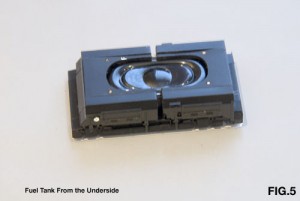 Bachmanns instructions detail removing the body so I wont bother to cover that here. Once you have removed the body, remove the fuel tank. It is held in place by four clips. It can be carefully levered off, but take care to avoid breaking the clips. Remove the switch held on by two small cross head screws and unsolder the wires from the switch PC board. As these wires were already down there I decided to use these for the speaker connections. Bachmanns mother board already has speaker connections on it so I re-routed the switch wires at the top end to the two pads marked SP+ and SP-. See Fig 2.

With the fuel tank removed, I cut an oval hole in the bottom with a Motor tool and drilled and tapped four speaker mounting holes 10BA. If you prefer metric, M2 is about the same size. Or if you are really rough you could glue it in, but being an Engineer I couldn’t live with that option. See Figs 3 – 5. A small amount of plastic needs to be removed from the fuel tank interior stretcher to give clearance to the speaker edge. It’s best to solder the wires to the speaker before installing it in the tank. Then clip the fuel tank back onto the floor. As the 21pin plug carries speaker connections from the chip, the cables soldered to the decoder are not needed and should be removed. 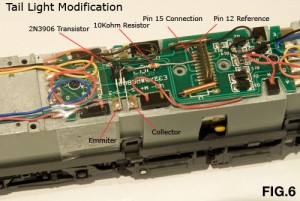 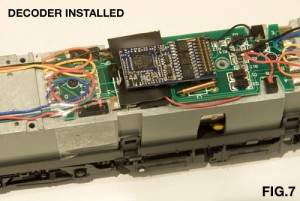 South West Digital uses the F0 or Headlight function to control the 4 character headcode illumination. This is a directional function and thus the lights only come on in the direction of movement, this keeps things simple and I have no problem with that, Bachmann have paralleled the tail lights onto the headlights via the fuel tank switch to give directional tail lights to the rear as well. The tail lights are on a separate positive feed and when the fuel tank switch is closed this connects the tail light LED’s to the blue positive feed from the decoder. To make this operational via DCC I replaced the switch with a 2N3906 transistor driven by AUX function 1. To do this the base connection of the transistor is connected via a 10K ohm resistor to pin 15 of the decoder plug on the Bachmann mother board. The collector and emitter are connected to S2 and S3 on the motherboard (see Fig 6). Note the transistor must be connected the correct way round or it wont work. (S2 and S3 are where we stole the speaker wiring from). There is plenty of room below the decoder for these components. A piece of insulating tape was fitted over these components before installing the decoder to prevent any shorting of components on the underside of the decoder, see Fig 7. With this installation all connections are made via the 21 pin plug, no wire connections are made to the decoder itself, which makes for a very neat installation.

South West Digital has functions 7 and 8 as spares, so wiring to pin 15 automatically assigns function 7 to switching on the tail lights. If you wish to reassign Aux functions to a different function number I suggest you contact South West Digital first or you may overwrite some of their mapping and find you are missing some sounds. Test it on your programming track to make sure you haven’t included any shorts, then clip and screw the body back on. If all’s well give it a test run. The F0 or headlight button turns on the 4 character headcode illumination and F7 turns on the rear marker lights. Note you can’t have the tail lights on separately, F0 has to be on as well. If you prefer there are enough function outputs on the Loksound decoder to operate all four lighting sections independently, but this will require a fair bit of rewiring to each lighting module and you’d have to be a masochist to carry it out. 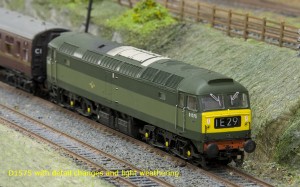 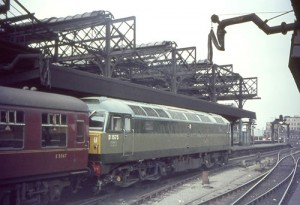 South West Digital sounds are good, but I think the engine Idle sounds more like a Sulzer Type 2. I was also a little disappointed in the Horn. F2 gives one note but F3 gives a combination of two. I would have preferred F3 to have the other note, so it could be played like the prototype. I might have to do some work with the Loksound programmer and see if I can drop some of my own sound files in.

Finally the model was given detail modifications to match the Prototype. See photos opposite. To see a video of the model in action scroll to the bottom of this page.

Note. Modifying the Bachmann locomotive in this way will nullify your warranty.

I have been informed the rear lighting mod may not work on later versions of this model as Bachmann have re-designed the decoder Mother board on this model. I cannot verify this as I don’t have access to a later model.