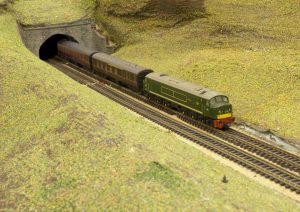 The layout depicts a secondary mainline running through the Dales/ Moors, (Yorkshire or Derbyshire, you can choose) as it emerges from a tunnel through a junction station and on to it’s final destination, wherever that may be. The junction station has a small goods yard serving an off stage town to the front. This is where passengers change trains for Martindale, higher up the valley.

Martindale is a terminus and grew because of the coal mine nearby, which is accessed off the branch before reaching the station. The goods yard is quite a lot bigger than the mainline station because of said mine and comprises a goods shed, cattle dock, coal drops and a large stone building housing a factory workshop.

Initially set up for DC power,(analogue) has now being converted to DCC.So far I am the lone member that models N gauge in the club, but currently I am assisted in construction by two other members.

Since the last update we have slowly developed the town scene at the end of the branch. This has included all the buildings being scratch built using Metcalfe brick paper and to more or less to the same size as their kits. I have used some shop fronts only and built a rear portion to match the angle of the backscene. The hotel was cut down to 2 stories and pavements were added to hide any gaps. Then with 3 or 4 background papers used to create depth, by cutting and moving features till satisfied with the effect. Ground works have been enhanced with static grass and little bits along the bottom of the boundary wall, also the railway has been fenced off. At the moment all the coloured light signals have been set in situ and are being wired.